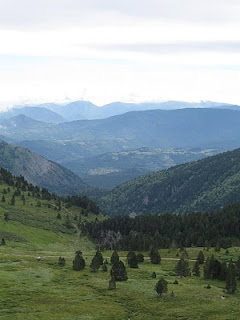 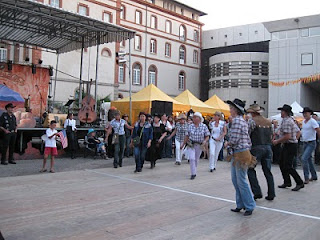 Country and Western festival at Pamiers
Yesterday evening, we all went into Pamiers to see a live band perform as part of the Country and Western festival that is taking place over this weekend. Dave and Daniel came along under sufferance…but actually found it very entertaining!! Before the live band (‘Rusty Legs’!!) started at 9.30, there was a dance floor and music to dance to. Lucy and I were itching to join in, but didn’t recognise any of the dances! Lucy managed a couple however, just by watching and following the steps – I wasn’t brave enough!!.

The live band were fun – and even included a bit of Elvis, Dire Straits….and Queen!!!….so the chaps were happy!! Eventually, a couple of dances came along that Lucy and I both knew, so we were able to join in! We also bought a couple of cowboy hats from one of the numerous stalls surrounding the square.
We were surprised to see so many people dancing and enjoying the music – and I managed to get some info on a Pamiers line-dancing group, which I will go along to in due course!!

Today, Sunday, we took the day off! The weather has been a bit unsettled all week, and was quite cloudy first thing, but we decided to risk it. We drove up to the ski resort of Ax les Thermes and dropped Daniel off with his bike at the bottom of the Col de Pailheres. We then drove up to the top of the Col (featured in the tour de France last week!). Dave, Lucy and I walked (hiked!!) up the mountain for an hour or so – amazing views but quite cool and windy – then wandered back down again to meet Daniel, who managed the ride to the top, but was ready for his lunch!!

There are more photos of July at La Maire at
http://picasaweb.google.co.uk/lesleyolver/LaMaireJuly201002#
Posted by Lesley and Dave Olver at 01:12