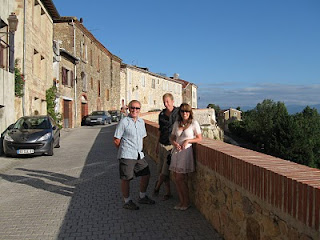 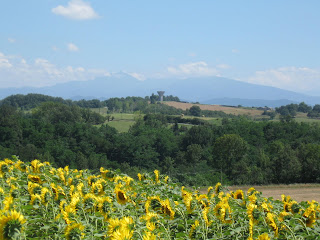 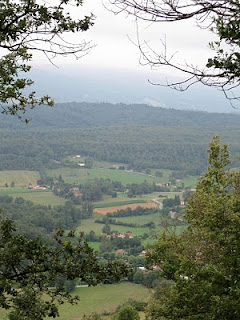 It has been a mixed week of weather – some glorious hot and sunny days, but also some cloud in between and finally thunderstorms and rain last night. The sunflower photo above was taken during a bike ride from a local view point.

This is the time of year when the French all go on holiday for at least two weeks – sometimes the whole of August, so shops and businesses close and everyone goes away!! This most probably means that we won’t see any progress on our phone line for at least another month. It seems it is just a matter of waiting until they have put the new lines in to the village, which is apparently more complicated than we first thought. However, it will be done. Magali at the office called them again last week while we were there and had a long conversation, stressing how important it is that we get a phone very soon as we have been waiting for so long, so she is doing her best for us and we are grateful that she is doing it for us, as I still find telephone conversations in French very difficult!!

As for progress at La Maire – Lucy has been painting all the landing walls and doors, so it all looks much brighter and fresher. The main bathroom is ready,, except for fitting a side to the bath, and Daniel has spent the week building the barbeque, which is almost finished. The patio slabs should arrive tomorrow so the sitting area in the back garden will soon be ready!
We have also connected up and used the new cooker, so the next job is to re-tile and paint the kitchen….then re-vamp the old bathroom.

Yesterday, we had planned a day out in the mountains as the weather looked promising. As we set off however, it started to cloud over and looked much less promising, so we made a quick decision to alter our route and go for a local walk instead. I had noted one not far from here that goes up to a hilltop TV mast and afforded fantastic views both over to the Pyrenees and also back to StVictor Rouzaud. The climb was certainly worth it, even in slightly murky weather. (See photo taken on the walk). We then drove home via the village of Sabarat, where we had our picnic. This is a very pretty little village on the river, and so full of character –prefect for painting, so I will be back!!

Posted by Lesley and Dave Olver at 01:05