Not the best weekend for Dave!!

Well we have now found out where the hospital is.....but not in the best way possible!!
Dave felt very ill on the Friday after Lucy and I left, with a high temperature and splitting headache. On the Saturday morning he woke to find a large bruise on his shin. He felt rough for the rest of the day but felt a little better and hoped it would go away!!
However the bruise had got worse by the Sunday morning so Dave decided to take himself off to outpatients at the hospital,which was very brave of him!! Very little English was spoken at the hospital but Dave coped ok - however the initial diagnosis was very worrying as they thought it was blood poisoning. While I was panicing somewhat at home and changing my flight to get back to France the next day, by the evening, the doctors had decided it was actually a skin infection - still a bad one needing treatment, but thankfully not as serious as we thought!!
I arrived back in France on the Monday - was thrilled and relieved that Lisa was able to pick me up from the airport and take me straight to the hospital. Dave was feeling much better and itching to get home by now, but had to stay in another night! I picked him up on the Tuesday and took him home with 3 weeks supply of anti-biotics and strict instructions to stay off the alcohol and rest. He has obeyed the former but he wont rest unless I tie him down - however the best compromise was to rest sitting on the mower, so we now have a fully mown lawn for the first time!
The weather is still lovely - and getting warmer by the day. However some rain is expected this weekend - eagerly awaited by yht e farmers I think as they haven't had their usual amount of March/April rain in the Ariege this year.
Am writing this in McDonalds in Pamiers - still no phone or Broadband at La Maire!!
Posted by Lesley and Dave Olver at 05:14 No comments: 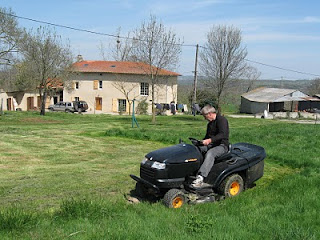 During my absence, the guys made good progress and coped admirably with food shopping, using the washing machine and various excursions to Brico Depot - transporting home 5m lengths of decking required some thought!! Daniel and Richard built an impressive area of decking at the back of the house, and the mower was finally repaired. Dave then spent most of the following week cutting the grass - the first cut of the season was a bit of a challenge as the grass was very long indeed!

Lucy and I had a good flight out - sat behind actress Tamsin Grieg on the plane - Lucy is a big fan of 'Black Books' so was rather pleased!
Lucy loved 'la Maire' and was very lucky to have some warm and sunny weather for her stay. I was suprised to see how much the garden had changed while I was away - signs of Spring everywhere and everything growing like mad!

Lucy took on the job of shutter painting during her stay (alongside a fair bit of sunbathing and talking to the neighbours' dog!) Green shutters are now all finished and back in place - they look lovely! We also did lots of cooking - mostly cakes - some of which we gave to the neighbours as a thankyou for their gifts of lovely fresh eggs.
Daniel and Richard took on the difficult task of putting insulation in the 'garage room' ceiling and finishing it off with plasterboard. This will eventually be our main guest room so it was good to make a start. Dave is making progress in the new bathroom, but also keeps finding 'little jobs' to do in the garden which is so inviting at the moment! I also wielded a paintbrush - both watercolour and emulsion - generally kept food on the table, and even planted some seeds!

Our stay was punctuated by the flight chaos caused by the dust cloud from the volcano in Iceland. Dave and Daniel were due to fly back to the UK for a 5 day Land Rover driving holiday in Morocco. This was a competition prize won by Daniel so had been eagerly awaited! Their flight was cancelled, but thankfully for them the trip has also had to be postponed. Lucy and I managed to get our scheduled flight home on Thursday - so we were lucky!

The saga of getting a phone line and broadband to La Maire continues! Our initial contract had to be cancelled, then a new phone line ordered - but it now appears more lines are needed in the village, so it seems we will be waiting a while longer! However, we have mobiles, helpful neighbours with broadband, and there is always McDonalds which provide free Wi-Fi - so we will manage for the time being!

Lucy goes back to Loughborough on Sunday, then I will return to France in time for our next visitors - Mum and Dad are coming to stay for a week in May. We are very much looking forward to their stay and showing them around the area - and hope they will also have their usual luck with the weather when on holiday!!
Meanwhile, we need to find a bed....

Next blog update near the end of May - or sooner if we get online!
Posted by Lesley and Dave Olver at 01:26 No comments: