Posted by Lesley and Dave Olver at 06:18 No comments: 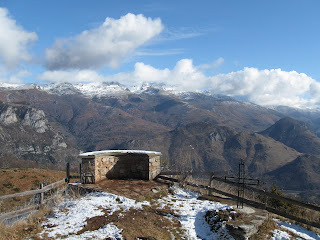 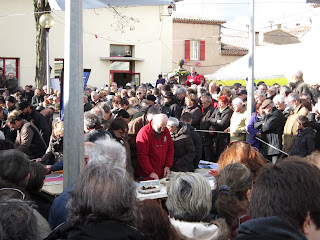 Last Sunday we drove to the little village of Moussoulens in the Aude to sample a little bit of traditional French life. It was the annual truffle fete. There were many stalls serving food and local crafts, as well as wine tasting. But the main event, the sale of truffles, started at 2.30pm, and not a second before! The 'delicacies' themselves were carefully unwrapped about 5 minutes before the sale was allowed to begin. In the meantime the crowd had been gathering in anticipation with cash at the ready and cameras clicking frantically. When the sale was finally allowed to begin, it was a bit of an anti-climax, for us anyway. It was very calm and good-humoured - but huge amounts of cash changed hands. Being able to cultivate truffles here must be a sure way to get rich quick!
You can see some photos of the event in our album below

We have had some lovely weather again this week, but it's all changing this weekend, with snow forecast for tomorrow and temperatures dropping. However we made the most of the of the sun today and drove up to the little village of Larcat, between Tarascon and Ax. We followed a recommended 2 hour circular walk up to the little Chapel of St Barthelemy which is situated in the most wonderful spot. Apparently an outbreak of cholera in the area in 1854 provoked the decision to kill a local family infected by it to prevent it spreading. As atonement and in commemoration, this little chapel was built -so a tragic story, but such a tranquil place. There had been a dusting of snow overnight as well, which made the walk even more beautiful and atmospheric. When we reached the snow-line we went from warm sun into a snowy winter woodland -beautiful!
As a reminder of life as it used to be in this area when the villages were more highly populated and people had a much greater need even than now to live off the land, the agricultural terracing of the valley is still very evident. This can be seen in a couple of the photos in our album here 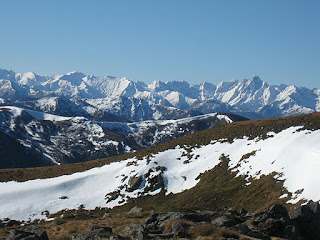 We had a good journey back to La Maire on 3rd January, despite driving through the storms sweeping across the UK and northern France. We left Maidenhead at 5am and arrived here before 9pm which was good going - probably the best drive yet!

The last couple of weeks have been mostly dry and sunny with the occasional morning frost. The countryside has a very different look at this time of year. Now that all the leaves are down, the fields are empty of crops and the verges all cut back and tidied it looks very pristine and open - and surprisingly green. The snowy mountains also look very close in the clear air.
We had another walk on Tuesday at the Prat d'Albi, the summit just the other side of Foix last week. Lisa joined us for a really enjoyable walk and picnic. Incredible views again - see the photo above.
We have also spent some time driving around the local area delivering leaflets to publicize our chambres d'hotes, watercolour classes and picture framing. On leaving the neighbouring village on Thursday we saw a hot air balloon - quite an unusual occurrence here! It was starting to descend so we drove uphill hoping to see it land. We were in luck - it came down in a field right next to the road. It was clearly such an unusual event for the cows in the field that it caused a stampede! Dave was lucky enough to have his camera on him - so a photos will appear in his 'photo a day' at the end of the month.

The next job in the house is to put up some bannisters around the stairs in the attic, which we are using as my picture framing workshop. Suitable wood is very expensive to buy, but luckily Dave found some old pieces of manger in the stables which are perfect for the job. He is cleaning them up ready to put in place - they should make a nice feature as well as serving a purpose!
Yesterday evening we were invited to dinner with Jean Paul and Magali, along with Jean Paul's sister and brother-in-law. It was a very lively and enjoyable evening - speaking both French and English, and the time flew by. We could hardly believe it was 1.30am when we got up to leave!
We love the way that aperitifs are often the most important part of the meal here. We had a choice of champagne and 6 different kinds of whisky - so Dave was in his element!The meal was also delicious!
Today we went out for a local bike ride to clear our heads! We explored a different route out from La Maire, up through the forest following the St Jacques de Compostelle route, then back down through the country lanes - beautiful!!
There are a few more photos of the month so far here
https://picasaweb.google.com/106845264213097004579/January2012
Posted by Lesley and Dave Olver at 03:30 1 comment: