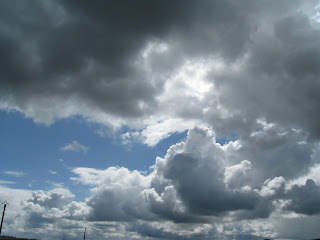 Here are our photo a day albums for April. Its been a month of mixed weather! 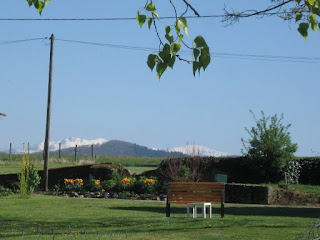 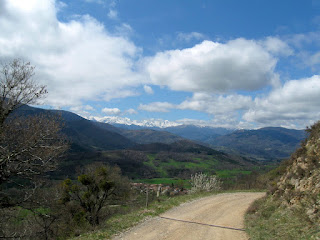 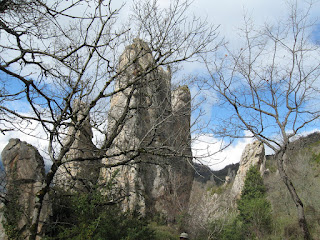 Here we are in the middle of April already and the the weather is very typical of the month. Heavy rain and thundery showers interspersed by some lovely spring sunshine - and a few grey days as well. As a result everything is growing incredibly quickly - grass and flowers - but also the weeds! The top photo above is of the rockery with tulips in full bloom and the mountains still very much covered with snow.
We have had a busy couple of weeks with guests - English, Spanish, Belgian and French so far and we have had some very enjoyable and interesting dinners with them. It is the school holidays here so we have had a couple of French families here for a few days exploring the area which was lovely.
At the beginning of the month we were invited to the annual hog roast up at the farm along with all the local farmers who hunt in the area and help chop down trees. All the men received a 'trophy', beautifully made by Thomas -Dave received one for the 'best English lumberjack' for having helped them last month!
This happy event was followed by a disaster up at the farm. Their huge hangar full of hay went up in flames after some fuel exploded. Dave ran up there to help when we saw the smoke and within minutes all the other local farmers had arrived to help as well. The fire brigade arrived just in time to stop the flames engulfing the cattle barn. The fire was huge. Luckily no-one was hurt but the hangar and two tractors and some machinery were completely destroyed, as well as all the hay. Six fire engines continued working through the night to contain it. Despite being well insured, a fire like this is devastating - the hay cannot be quickly replaced and life and work has to continue despite rebuilding. It has astounded us how readily everyone rallies round to give whatever help they can. Over the next few days neighbours continued to call at the farm to lend machinery and to give them the much needed hay. Cleaning up will start next week.

On Easter Monday we were able to get out for a short walk near Foix from a little village called Caraybat. The valley looking up towards Montsegur looked beautiful in the spring sunshine. We climbed up to some interesting needle-like 'dolomite' rock formations which dominate the village. There are a couple of photos of the walk above.
Dave has been kept busy cutting the grass and making some minor repairs to the mower, strimmers - and even the Land Rover....but luckily nothing too serious! He has also taken up his old hobby - fishing. The sea is a little far away for a days fishing so he went locally to Lake Mondeley early yesterday morning to try out his new spinning rod. The trout were not really interested - but he did manage to land a large pike. The fish managed to get away before Dave could get hold of it, but Dave assures me it counts as 'a catch'!!
Posted by Lesley and Dave Olver at 01:25 No comments: 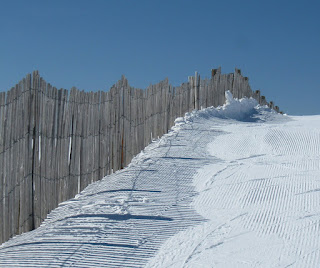 Here are our albums for March. Its been a varied month with some lovely days skiing and a taste of summer