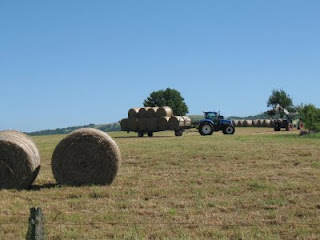 After several weeks of almost perfect weather, it seems we are in for a few days of thunderstorms and heavy rain. Unfortunately this means we won't be able to have the pool liner fitted on Wednesday as planned as it needs to be warm and sunny, but we have re-arranged it for next Tuesday instead - so fingers crossed!

On Friday evening we were delighted to welcome the McCloughlin family to La Maire -our first B&B guests. It was a real pleasure to meet them and to share dinner with them as well. In fact for us they were perfect first guests. They assured us that they really enjoyed it as well - so that was a relief!!

May has been a wonderful month - lots of colour in the garden and constantly changing light. The cloud formations over the Pyrenees are also quite stunning at times.
See here for some photos
http://picasaweb.google.com/lesleyolver/May2011ImagesFromTheGarden

Jobs for this week include tiling the kitchenette in the 'suite', more pool tidying and finishing the plumbing and furnishing in our 'bolt-hole' in the loft. Other than that - just gardening....and soon (hopefully!) relaxing by the pool!


Posted by Lesley and Dave Olver at 12:47 No comments: 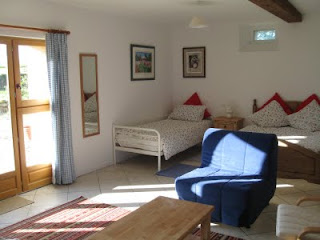 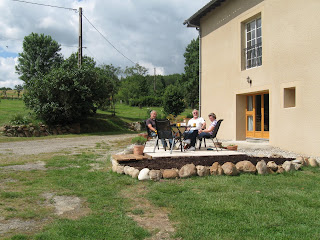 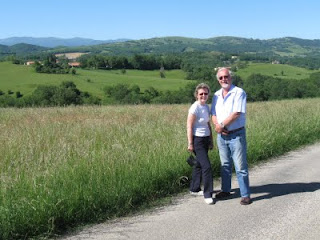 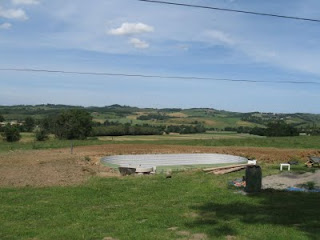 The blog is a little late this week - but I wanted to include a photo of the pool, which is now ready to have its liner fitted on 1st June and then filled with water!! A local gardener with a digger came to move the mounds of earth for us, then Denis from the farm came down with his tractor to smooth it all out. This was a very satisfying day for us as the mounds of earth around the pool have been a bit of a blot on the landscape since November, and we can now see the end of the 'pool project' in sight! We now need to get some grass planted asap!

We have also made further progress with the Pyrenees Suite. The shower room is ready and the room is all furnished and ready for use. Just the kitchenette to finish off this week.

We enjoyed having Marilyn and Peter here to stay for a few days. They were lucky with the weather and were able to get out and about a bit as well as helping us in the garden. It was even warm enough for a barbeque one evening, and a breakfast on the terrace one morning.

Posted by Lesley and Dave Olver at 02:15 No comments: 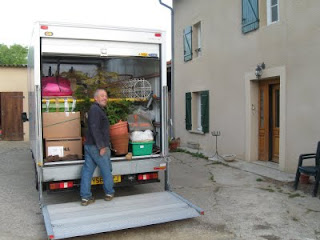 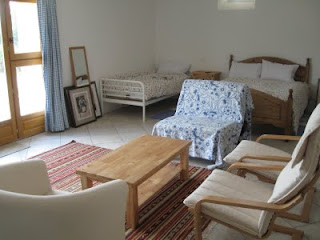 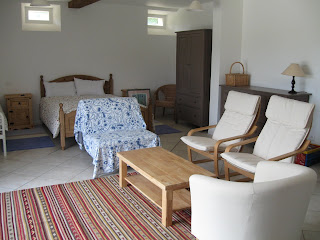 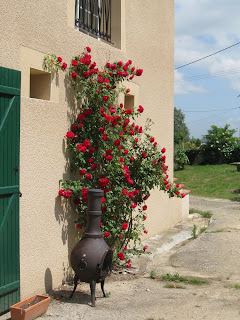 Neither of us wish to see the inside of a van cab again for some time to come, but having said that, the 'Berkshire Van Hire' truck served us well over a week. We flew back to Maidenhead to sort out the garage and 'framing room' and get everything that we hoped to bring back to France packed up and ready to load. We had a day to pack the van - at first it seemed to swallow up all the boxes and equipment, but we soon ran out of space and ended up balancing our favourite Lloyd Loom chairs on top and squeezing as many plants in as possible before deciding that there was really no more room to spare. We set off early and drove through France on Friday 29th April - I was sorry to miss 'the wedding' but had regular updates from Lucy and Mum and Dad.
We arrived at La Maire before midnight - so not bad going! Because the van was loaded, we had to travel as freight with Eurotunnel, which meant leaving the van in the open and joining the truckers in the seating carriage for the crossing. Unsurprisingly, I was the only woman there!!

We had four days here to unload and cut the grass. We also managed a large Ikea shop with the van on Tuesday, before setting off to drive through the night back to Maidenhead. The night drive was better than we expected. We both managed to doze a bit and were surprised just how many lorries there were on the motorway - at least it kept us alert. I was also surprised how hungry we were through the night - breakfast of juice, coffee and a couple of fresh pastries at the tunnel terminal building was one of the best I have ever tasted! That evening we also drove the van back to Gatwick to collect Daniel and 4 bikes from his Prague/Vienna bike tour with 3 friends-so the van did serve us well!

So now we are back here at La Maire for the final push to get everything ready. We have spent the weekend assembling furniture and working on the garden outside the Pyrenees Suite. The aim is to finish it by the end of this week -so hopefully by next weeks blog...................

The weather yesterday was very blustery, but today has turned calm again, and also very warm. We didn't eat until 8.00pm but sat outside as it was warmer than inside the house. It was so lovely to just sit and enjoy the peace and quiet apart from birdsong - and a tractor in the distance.

The photos above show the van (before unpacking), then the Pyrenees Suite so far - still quite a few finishing touches to add, including putting pictures up, but actually looking like a proper room at last! The final photo is of our lovely climbing rose at the front of the house - quite a picture!

Posted by Lesley and Dave Olver at 12:25 No comments: